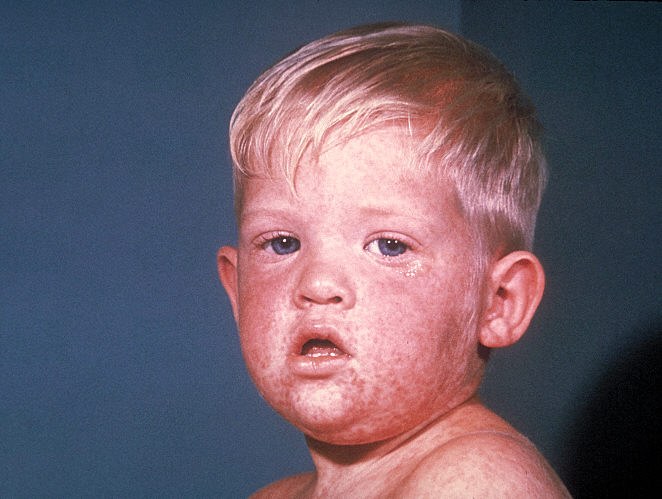 Measles is an acute, highly contagious respiratory disease caused by a virus. Most people in the United States are protected against measles through vaccination.  However, unvaccinated travelers can get measles while they are in other countries and bring measles into the United States. They can spread measles to other people who are not protected against measles, which sometimes leads to outbreaks. This can occur in communities with unvaccinated people.

The symptoms of measles generally appear about seven to 14 days after a person is infected. Measles isn’t just a little rash. Measles can be dangerous, especially for babies and young children. Measles typically begins with

If someone is sick and has symptoms, they should call their health care provider to let them know that they have potential measles exposure before going into the provider’s office.

Measles spreads to others through coughing and sneezing.  Infected people can spread measles to others four days before through four days after the rash appears. The measles virus can live for up to two hours in an airspace where the infected person coughed or sneezed.  Measles is so contagious that if one person has it, up to 90% of the people close to that person who are not immune will also become infected.

Measles can be prevented with MMR vaccine. The vaccine protects against three diseases: measles, mumps, and rubella. Children are recommended to get two doses of MMR vaccine, starting with the first dose at 12 through 15 months of age, and the second dose at 4 through 6 years of age. Teens and adults are considered up to date on their MMR vaccination if they’ve had the two doses. Individuals born before 1957 are considered immune.

MMR Vaccination: What Everyone Should Know